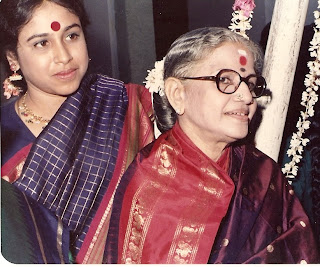 Sep 16, 2010 was the 94th birth anniversary of Smt MS. Encosed below is a link to a tribute by Shri V Ramnarayan, the Editor of Sruti magazine.

“Like everyone who has come into contact with MS, I was struck by her simplicity. Her essential goodness is foremost in the memories of most who knew her—as much as the sublimity of her music.”

“The award, in the name of the legendary musician, will be presented annually to a promising Carnatic vocalist.

A jury comprising eminent musicians and art critics will select the recipient based on the artist’s performances during the year, particularly those during the ‘Marghazhi music season’.”

Entire news article can be found at this link :

The Hindu and Saregama to institute M S Subbulakshmi Award

This award aligns well with what Smt. MS outlined in her acceptance speech when receiving the Sangita Kalanidhi award. That her request is that young musicians should be encouraged; that a peer of experts must select the most promising musicians and give them opportunities to perform. That this is very important for Carnatic music to flourish.