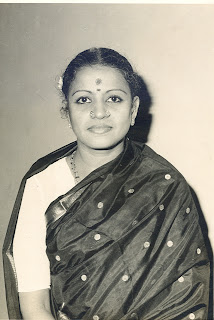 “Towards the end of each recital M.S. would sound the cymbals in eyes-closed concentration for the Rajaji hymn “Kuraionrum illai” (I have no regrets). It becomes obvious that for all the splendour of her music, it is her image as a saintly person which will probably endure for long, just as in the case of Meerabai. For, in the highest tradition of the Indian way of life, Subbulakshmi linked her art with the spiritual quest, where humility and perseverance assure the sadhaka of grace.”

From the article by Gowri Ramnarayan in the Hindu – The M.S. phenomenon