The MS I Knew

“M.S. Subbulakshmi was a simple woman with divinity in her voice” Pandit Ravi Shankar

In the foreword for the book MS & Radha by Gowri Ramnarayan,
Pandit Ravi Shankar wrote about meeting MS for the first time :
“met her for the first time after my first solo recital at the Madras Music Academy in end December 1949. It was  a most thrilling experience to see her sitting in the front row along with all the senior, great musicians. I heard her, during that same period and many more times in several parts of the world. I became an ardent fan of hers like millions of others.”
END_OF_DOCUMENT_TOKEN_TO_BE_REPLACED 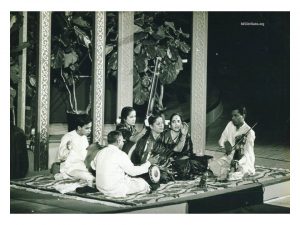 Read the article originally published in the Hindu  : Moment of pride for all Indians

“The day was October 23. MS held the distinguished audience in thrall.”

“Madame M.S. Subbulakshmi, one of Indias most eminent musicians, gave a recital of Indian songs today in the General Assembly Hall, as part of a 1966 United Nations Day (24 October) celebrations.”