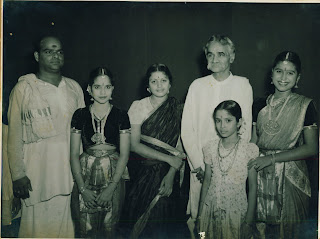 Original Article written by Smt. Anandhi Ramachandran, published in Kalki Magazine, and can be found at http://www.msstribute.org/people/aduvome-paduvome.php

Article describes the preparation leading up to Radha and Anandhi’s Arangetram and also subsequent recitals.

A rough translation of the original article is enclosed below.

We did our abhinaya to the singing by MS (Smt M. S Subbulakshmi). The celebrated photographer Nagaraja Rao snapped the photos of Radha (Smt Radha Viswanathan) and myself individually, as well as together.

Until now, we had both learned all our dance items together in class. But, for the past week, our teacher Ramiah Pillai made us each dance separately. If both of us did the abhinaya together, Shri T K C felt the audience would be perpetually torn about who to look at and so this will make the experience less cohesive for them.

Since everyone felt his opinion was valid, it was decided that we would do the Nritta portion together and do the abhinaya separately.

A Singer sewing machine, an assortment of fabric pieces, borders with zari, books with varying designs all started accumulating upstairs at Kalki Gardens and they also arranged for a tailor to stay in house. We can never forget Ananthanarayanan (Sadasivam’s nephew-in-law) who toiled night and day to resolve the multiple logistics around getting the costumes ready on time and with quality.

Given the additional criteria, that the costume should adorn us like a sari but also have a pajama, the tailor painstakingly first tried the pattern on paper, then on throw away cloth that we used to call “ceeti”. Eventually, he made it out of a green satin cloth with a gold zari. Radha and I loved its soft feel to the touch. However, when Sadavisam and MS saw it, they vetoed it, saying “ It is too bright and shiny .. It is not nice ..” Then, MS brought out a beautiful blue and gold sari that she had worn in Meera and gave it to the tailor. The tailor was so reluctant to cut that resplendent tissue sari.

Once we tried out the costumes that were stitched with this sari, they were approved. Jewels were scrutinized carefully, next. We would be wearing the borrowed Manga Malai (necklace with mango like patterns) through the Varnam; for the abhinaya pieces, we would wear the necklace with a pendant anchored by a long string of pearls; a garland of flowers was the innovation for the song Aduvome Pallu Paduvome.

The program booklet was also very creatively done. Every page had the details about one song along with a picture with the pose for that song. The tiny booklet was stitched together by a string with two anklet bells. It also had pictures of our teacher Vazhuvoor Ramiah Pillai and MS.

Thirupugazh Mani T M Krishnaswami Iyer was invited to be the Chief Guest for the Arangetram. When the first bell rang, the screen was opened and a special backdrop with the picture of Nandi was revealed. There was a slight delay in the arrival of the Chief Guest. Some of the audience who lost their patience in a matter of just 10 minutes started singing the song ‘Satre vilagi irum pillaai sannidhanam marikudaam’ – pleading with Nandi to not block the view ! This caused a lot of rustle and bustle amongst the audience.

A lot of amazement was expressed about the teeming crowds for the event. We were just children. We thought the overflowing audience had to come to see our dance! We only realized later that the catalyst was the padam singing by MS.

Our dancing to the patriotic song Bharathiyaar’s Aduvome Pallu Paduvome, wearing the garland of flowers diagonally across our shoulder, was greeted with tremendous cheering by the audience. First, the intensity of feeling expressed in the song, remember it was before we got Independence. Then it was the attractive tune, the singer’s breathtaking voice, the dance choreography all contributed to the enthusiastic reception for that song. They applauded for each line, culminating in a thrilling finale imploring freedom and independence. Dancing to a patriotic song was not only a novelty but something that was entirely befitting those times.

Kalki’s composition of Malai Pozhuthinile was also a novel experience for the audience. This was also set to music by S V Venkatraman. I played the role of the nayika while Radha played the role of Lord Muruga. In those days that was a new technique. We danced with our usual costumes; the varying roles were apparent in our abhinaya. It set a new trend.

When Radha gave an impish smile for the lines

(Astride a peacock, the valiant one gave a beautiful smile)

the audience laughed along happily.

A little later, the Bharathi Vizha occurred at Ettayapuram. Shri T KC requested that there should be a dance recital by Anandhi-Radha at that event. There was also a music concert by MS. My father selected a new song by the poet for Bharathi Vizha.

(To herald the imminent victory in 8 directions, beat the drums with joy)

and S V Venkatraman tuned it to raga mohanam,

After a shortened alarippu and varnam, when MS started singing Aduvome, the rousing cheers seemed to reach the heavens. And the victorious claps from the audience truly seemed to reach all 8 directions ! The dancing to such patriotic songs was appreciated by many of the elders of those times. These 2 songs, set to the same tunes, danced by Kumari Kamala in AVM’s movie Naam Iruvar became well known throughout the land and for the movie, the songs were sung by Smt D.K.Pattammaal.

Then the Kambar Vizha took place in Chennai at Rajaji Hall. Shri T KC painstakingly selected songs for this occasion, one of them being “ Thol Kandaar Thole Kandaar” This describes how the young girls in Mithila were smitten by how handsome Lord Rama was. This simple pretext helped underscore the element of bhakti as well. This song was also tuned by S V Venkatraman. Before the dance commenced, Shri T K C explained the meaning of the song in his inimitable style.

It became tedious to keep doing the same varnam ‘Karunai Seididalada’. Sadasivam requested Shri Papanasam Sivan to compose a Pada Varnam in Tamil. Sivan composed Nee Inda Mayam in Dhanyasi and sent it together with the svara and tala notations. Though it was Sringara Rasa, it was still suitable for us and was full of wonderful bhavam. Ramiah Pillai strung together Azvaar Pasurams like varnams and taught them to us. Like this, Tamil compositions were prominent in our recitals. In those days, these were all very new concepts. Their intent was to help ensure a positive reception for the art of Bharatanatyam in Tamilnadu and to enable it to be easily understood. We also danced to Madhura Nagarilo, and the sabdam Sarasijakshulu .

Kalki Krishnamurthy, Rasikamani T K C, MS, Sadasivam joined together to do a devoted service to the art of Bharatanatyam. When Kalki started writing Sivakamiyin Sapatham, Bharatanatyam became even more popular. We cannot deny or forget the fact that they were responsible for the clinking of ankle bells and the melody of Tamil songs all across Tamilnadu. Via their words, deeds and actions, their writing and musical talents, they helped bring about a renaissance. The fact that we participated in this revival even with out realizing it is still amazing to ponder !

Here is a relevant passage written by Gowri Ramnarayan (Anandhi Ramachandran’s daughter) in her book MS & Radha : A Saga of Steadfast Devotion

“ The 1940s also saw MS in a new role. Ten year old Radha and Kalki’s 12 year old daughter Anandhi were being groomed in Bharatanatyam by Vazhuvoor Ramiah Pillai. The girls had the privilege of MS singing at their rehearsals and performances. The girls’ enjoyment doubled when MS donned her red dance costume and joined them as they practiced adavus. Having watched Balasaraswathi from her youth, MS instinctively knew abhinaya. Ramiah Pillai would teach the gestures for the padams and say “ Ask Amma to show you how to do the abhinaya. “ …

Bharatanatyam revivalist E Krishna Iyer reviewed their recital in the Free Press Journal, acknowledging the talent of the young dancers, their guru’s fine choreography and training skills, and paid tribute to the aesthetic sense, involvement and maturity of MS that he discerned in every aspect of the presentation. The young dancers acknowledged the truth of this deduction on the part of the writer. Radha recalled : “ Amma did everything for us backstage, helped us don costumes, jewelry, flowers, and plaited our hair with kunjalam. Then she went onstage and sang for us. “