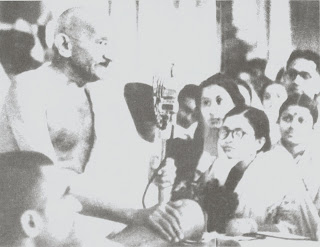 In the beginning of this speech(1947), Gandhiji talks about MS

Here is a link to an article about Hari Tum Haro and how it was a gift from Smt M S Subbulakshmi to Mahatma Gandhi.

‘Through that night-long recording session, Vaidyanathan set Hari Tum Haro to music, for Subbulakshmi to learn and record immediately. The spool tape left for New Delhi the following morning, on 2 October, in the care of Sadasivam’s nephew, aboard a Dakota flight. Thus, on the evening of his birthday, Gandhi was able to listen to his beloved bhajan. Subbulakshmi would learn what he had to say about the music only later, from Maniben Patel’s diary. “Her voice is exceedingly sweet,” Patel had quoted Gandhi as saying. “To sing a bhajan is one thing; to sing it by losing oneself in god is quite different.”’