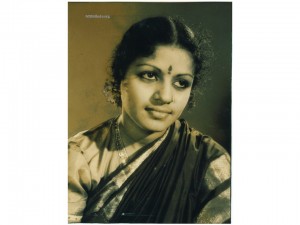 In  the book MS&Radha  Gowri Ramnarayan writes – ” What was the song that your husband remembers so well ? Kunjamma disclosed it was a Marathi song that she had learned somewhere in Madurai, possibly rendered originally by Bal Gandharva. She began to sing it.

As the song flowed around the room in a golden stream, the grandniece remembered seeing it as a child in an old notebook of handwritten Bhajans.

There was no hall, no audience, no mike but Subbulakshmi’s voice rang as if she were singing in a  huge theatre before a vast crowd. The words came in swells again and again. Her eyes were closed, her hands moved like petals in the breeze, and incandescence filled the air ….”